Talking fashion, Pr, and the changing industry with Portia Shaw of Pop PR.

When I decided that I wanted to be a fashion writer, at the somewhat unusual age of 31 one of the first people to invite me to shows and events was Pop PR boss Portia Shaw. We share something in common, that year was 2011, the year Pop was born. With a client list that stretches across the globe and bases in both London and L.A. I thought it was high time I interviewed her on not just the industry, but her opinions.

Welcome to MilliOnAir, first up the introductions, can you tell us a little about yourself and Pop PR?

Thank you so much for the intro MilliOnAir – I am a Londoner who considers herself a punching bag to the fashion masses, mother of 1 chihuahua and 2 labs, girlfriend to an American entrepreneur and not so secret mouthy feminist. I am also the MD for POP PR which is a fashion, beauty, tech and events agency.

We bring brands and products to the media from around the world, we have an office in Oxford Circus in London and we have just opened another one in West Hollywood, Los Angeles. POP was launched back in 2011 and has been going from strength to strength thanks to the incredible support of influencers, media and celebrities to continue to come back to us for our client’s exquisite pieces. 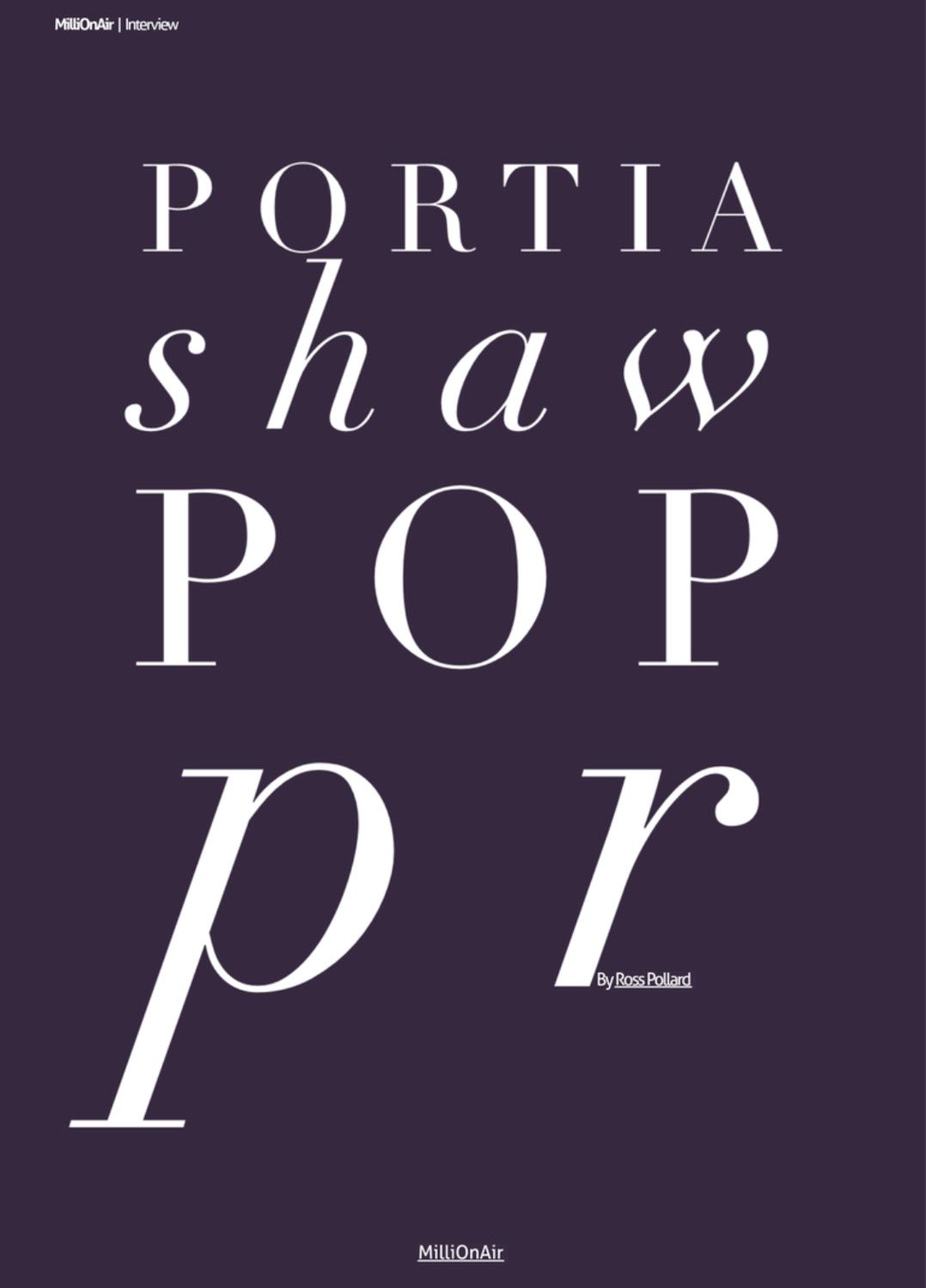 There is a perception in some areas that PR is just standing on doors checking invites, press lunches and chatting with designers, it’s a stereotype that is far from the reality of the industry, how would you describe the core functions of a good PR agency?

That’s a funny one and to be fair there is an amount of this, but nobody seems to realise that in order to understand your product and the markets needs as well as the medias demographic we need to spend a lot of time with our clients and press, I’ll be damned if I’m doing it sitting on the edge of someone’s desk with a coffee in a plastic cup and PowerPoint presentation in the other.

We create dynamic content for our clients and present this to press through whichever way we feel appropriate. We know what products need to be shown to who and what they will pick up on, we also read people, you can tell when someone doesn’t give a flying F about a product by the glazed look in their eye. The other function is honesty, when a client has a product that isn’t right, we have to tell the client and work out a way in which it can be represented to them in a way that they might like.

Pop PR has a client base of both established and emerging designers, with the emerging fashion labels in the UK there is a huge amount of churn, what do you think it takes to move from start up to established?

Money, patience and timing – gone are the days when people will do something for nothing, so if you are a start-up brand, make sure you have a marketing budget that allows for press stunts and ideas that excite media so they come back to you again and again.

”Thank you so much for the intro MilliOnAir – I am a Londoner who considers herself a punching bag to the fashion masses, mother of 1 chihuahua and 2 labs, girlfriend to an American entrepreneur and not so secret mouthy feminist. I am also the MD for POP PR which is a fashion, beauty, tech and events agency.”

Will you ever move away from the instantly recognisable Fashion Week look of all black everything for your team?

The only reason we do it is because everyone has black in their wardrobe, it usually looks smart and makes the team instantly recognisable if someone needs to speak to one of the team. I am a huge fan of this look and when I was junior, this was the uniform guidelines we were given which actually worked very well.

Speaking of LFW, do you think the BFC is doing enough to support British labels as it’s come in for some criticism that it’s featuring the same designers season after season and the costs of being on the schedule or in the showrooms is pricing out young talented people?

It’s a tricky one, I understand why the BFC is there and I recognise a lot of good that they do, however as someone that has stood on the side-lines I have witnessed them turn away numerous international brands for reasons nobody understands. We have a client from Malaysia who repeatedly applied and kept being declined, that client has gone onto opening stores around the world with runway shows in every other major city and was summoned by Kate Middleton to attend an event here in London this year.

The guidelines to be an on-schedule designer have not changed in years which indicate a dated view on how designers achieve the goal for being on-schedule. That said I have a lot of respect and time for the BFC and I believe we need them here. The hulk of British designers have lower budgets than international brands which is maybe why the BFC haven’t been able to help the UK fashion labels.

Are Haribo the perfect invite bribe, or does a Percy Pig still reign supreme? 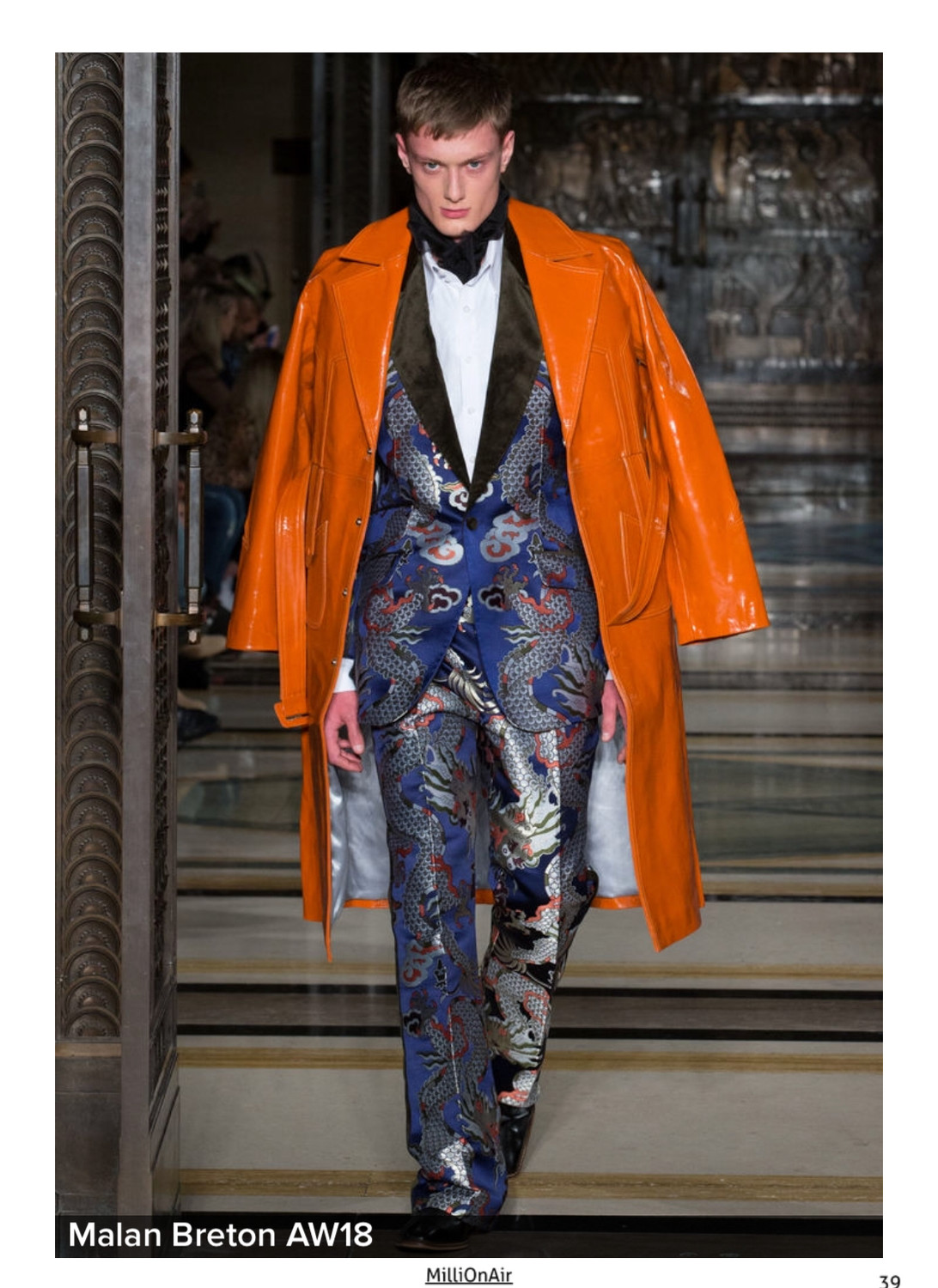 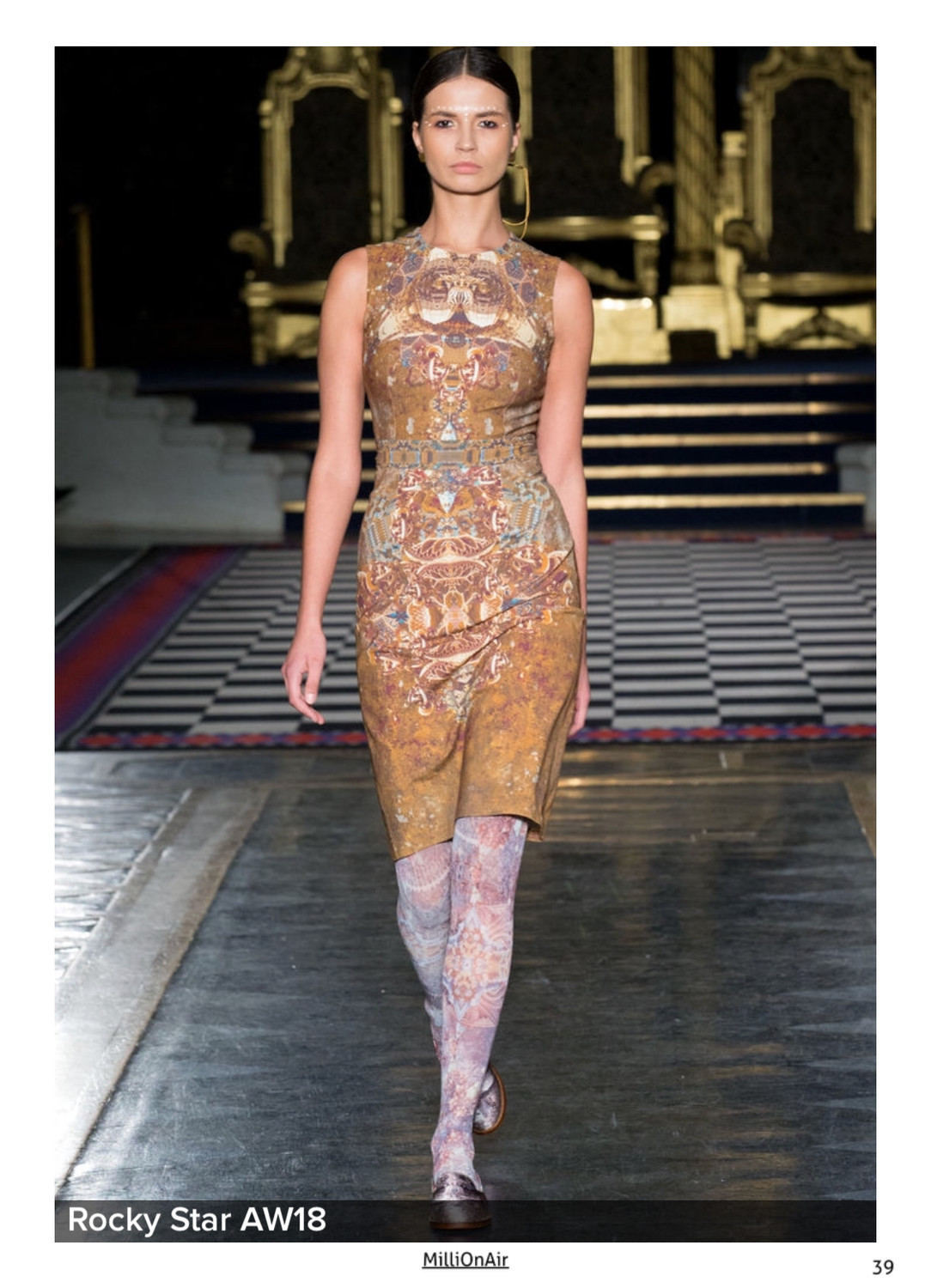 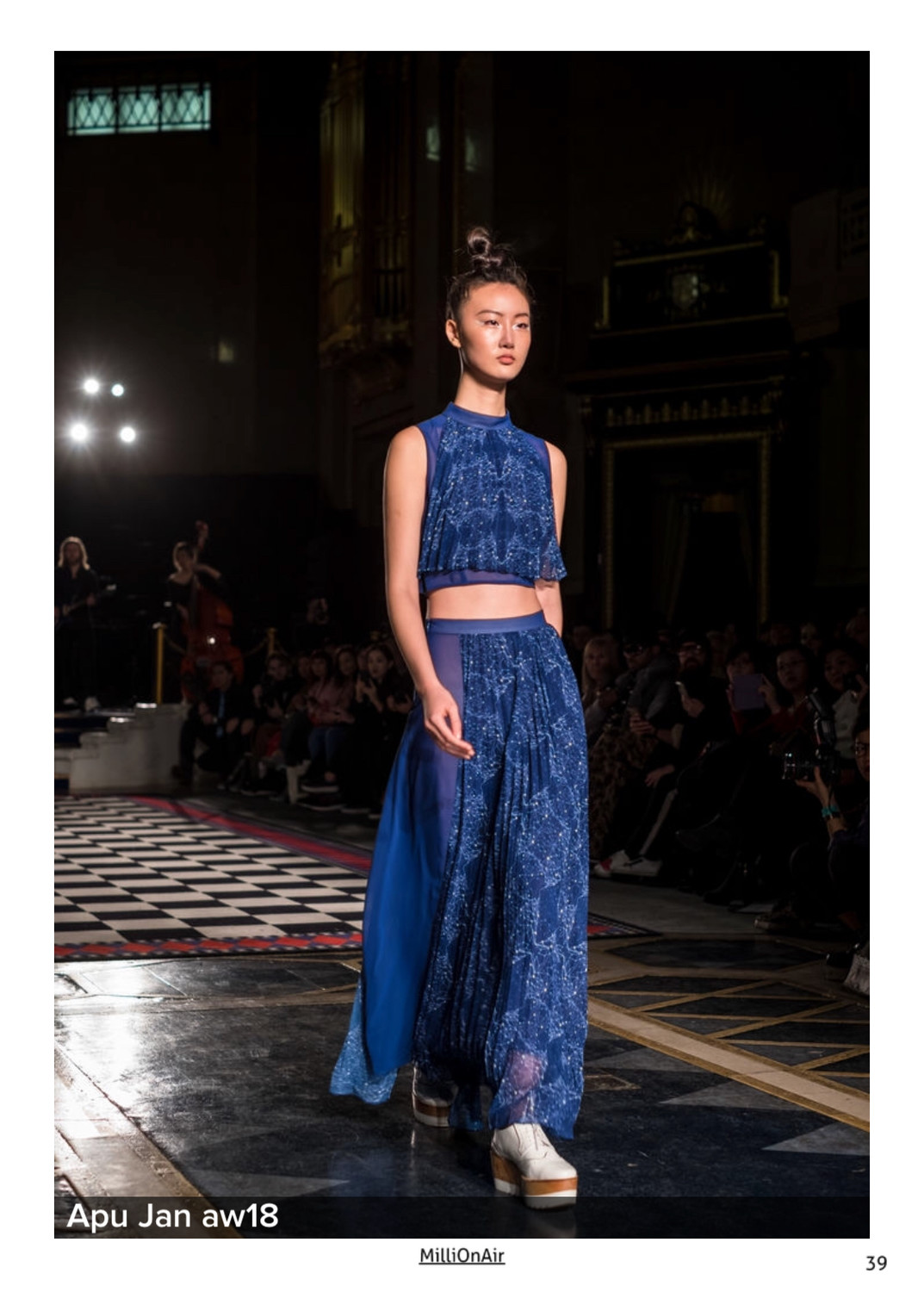 Fashion Week is changing, there is a lot of debate about the rise of the influencer & whether they really bring merit to the promotion of a label or it’s becoming an extension of their self-focused content. What are your thoughts on the changing nature of attendees, and achieving the best return on investment?

I love change, this is what keeps the industry interesting, it’s what keeps us on our toes and makes us change the game. HOWEVER, I hear where this question is going and yes there are a number of influencers who really can be rather unpleasant to deal with. They are important for some brands that retail in certain countries, for instance the UAE shop via Instagram, so when influencers who reach that audience are posting about brands that are available to buy in these regions there is value.

When influencers who serve high street realness to the masses start demanding front row seats at shows where client’s gowns retail from 10K then it becomes totally irrelevant. I’m all for everyone coming to be fair but I’ve never understood this demand to be on the FROW, I’ve sat back row at shows and stand at all of ours and see everything from there.

With that in mind, how do you assess results, we’re a long way from the days of rulers being used to add up all the column inches?

That ruler broke my dear . . . we measure results using digital outreach which we outsource.

You’re expanding into L.A. so naturally the real question is have you been to Universal Studios yet?

We have already expanded and sadly no, we have been to busy getting collections over and warmly ushering our American friends into the new studio. I’m sure we will get a visit in there at some point . . .

While L.A. is certainly a home to glitz, glam, and fashion, it doesn’t have a fashion week as recognised as London or New York, is it a different type of skill set that’s required?

To be fair we never expanded to be a part of LAFW, our goal was to give longevity to our clients collections with influencer, celebrity and red carpet media. There are not many magazines in LA however there are a lot of freelance stylists, it wouldn’t be fair of me to comment as I actually don’t know enough about LAFW but I am meeting with the organisers this summer to learn more about what they do.

Who do you think is the next label to look out for?

I can’t say any of our clients as that looks like I have a favourite . . . I think a label that has sustainability and socially and environmentally conscious will be the next big thing. Hint hint to any budding designers out there.

As you know, I’m OBSESSED with Apu Jan, the leader in the vanguard of Asian designers currently working in London, what do you think makes it such an attractive city to international designers?

London has a huge amount of heritage, as Brits we sometimes forget this and I think around the world not just in Asia this has masses of appeal and draws brands to show here.

And finally, how do you wear those fabulous heels for so many hours at LFW, like seriously, HOW?

To find out more about Portia Shaw and Pop PR, visit www.poppr.co